The stack is an area of SRAM that is used to temporarily store the contents of general purpose registers.  A register is saved to the stack using an operation known as a PUSH operation.   A register is restored from the stack using a POP operation.  In addition to saving and restoring  general purpose registers, we will also use the stack to allocate local variables and pass parameter to a function.

The Cortex-M architecture uses a software based stack.  During the initialization of the microprocessor, a section of SRAM is reserved for the stack.  The starting address of the stack is then loaded into R13 (SP is a synonym for R13 in the Keil uVison IDE).  The stack pointer is used to keep track of where new data will be added to the stack, or where already saved data will be restored from.

The advantage of a software based stack is that it provides flexibility in how the SRAM is allocated.  Many MCUs have fewer than 128KBs of SRAM, so  SRAM is a very valuable commodity that we want to allocate in a very judicious way.    If an application heavily utilizes the stack, the initialization code can be modified to reserve additional SRAM for the stack.  If an application uses very little stack space, the initialization code can be modified to reduce the amount of SRAM dedicated to the stack.

Some MCUs implement their stack using dedicated hardware that resembles a small SRAM used only for stack operations.  The primary benefit of a stack implemented in hardware is performance.  The primary detractor to a hardware based stack is that you are not able to adjust the size of the stack. 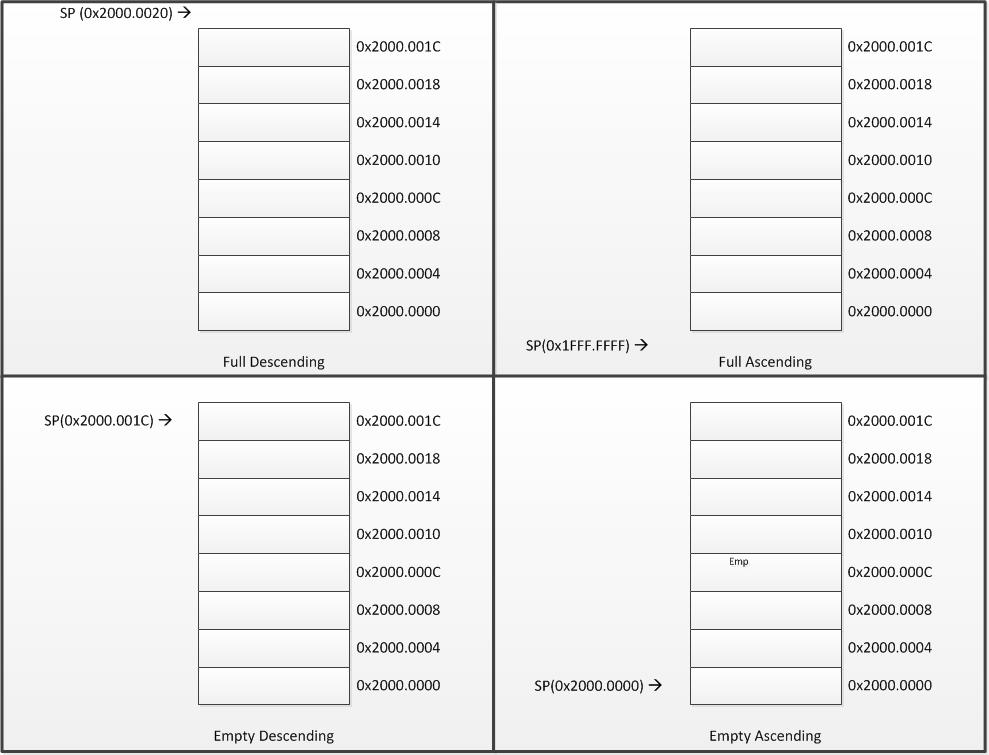 The Cortex-M architecture uses a Full Descending stack.  The size of the stack and the address it points to is set in startup_TM4C123.s.  The portion of the code that initializes the stack is shown below.

You can set the stack size by modifying the string constant Stack_Size.  The code above sets the stack to be 1K bytes.  Since the MCU uses a full descending stack, a label (__initial_sp) is placed at the memory address immediately after the SRAM reserved for the stack.

A good question is,  where is the stack located in SRAM?  The Keil uVison assembler places the stack after the last global variable that is allocated in SRAM.  The figure below shows an example of how SRAM is partitioned by the assembler. 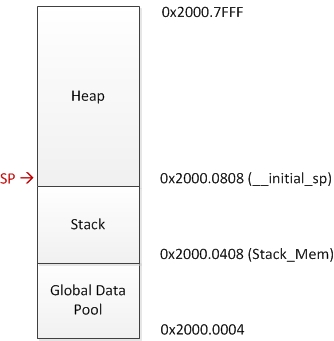 The global data pool consists of any global variables that were allocated by the compiler or assembler.  In C, any variable that is declared outside of a function is added to the global memory pool.  Below is an example of how to reserve 1024 bytes of global data.

The global data pool takes up 1K of data and the stack size was set to 1K ( see Stack_Size above).  The rest of SRAM is then reserved for the heap.  The heap is used for dynamic memory allocation (malloc) which will be covered later in class.

Its important to understand how the code you write affects the way memory is allocated by the assembler.  Allocating a large number of global variables could reduce the amount of SRAM available to the stack and/or the heap.   Not allocating enough SRAM for the stack can also lead to the stack clobbering global variables, commonly called a stack overflow.

Practical Engineering Note: In systems with very little memory, stack overflows can be a common occurrence.  If your systems begins to fail in a strange way for what seems to be an unexplained reason, increase the size of your stack and see if the problem goes away.  As an application grows in complexity, stack usage will go up and the size you choose at the beginning of the project can be too small.

Perhaps the most common use of the stack is to temporarily save the contents of a general purpose register.  The example below shows how a function saves the registers that would be overwritten by the function.  In order to save a register, we will use the PUSH operation.  The POP operation is used to restore a register.  PUSH is a synonym for STMDB ( Store Multiple, Decrement Before) where the base register is the stack pointer (SP).  POP is a synonym for LDMIA ( Load Multiple, Increment After) where the base register is the stack pointer.

Analyzing the two code segments above:

This example demonstrates a caller saved routine is implemented.  The idea here is that the calling function knows exactly what registers need to be maintained and saves only those registers to the stack.  This allows the function to freely modify any register without affecting the operational state of the calling function.

Analyzing the two code segments above:

In the examples above, R0 was used to pass the first address of the  data being examined.  R0 was effectively be used to pass a parameter to the function.  In C, the add4 function could be written as follows:

Instead of passing the parameter in a register, we could have alternatively chosen to pass the baseAddr parameter on the stack.  This requires the main routine to PUSH the parameter to the stack prior to calling the function.   Below is a snippet showing how to pass a single parameter via the stack.

The following snippet shows how the add4 function would be modified if the base address was passed via the stack instead of R0.

The C code below shows an example of a function that allocates various local variables.

If this C code were to be written in ARM assembly, it would look like this

When you look at the examples provided above, you will notice that there is symmetry between the PUSH and POP operations.  Every PUSH must be paired with a POP.  When a function pushes 4 registers onto the stack, it must pop 4 registers before the function returns.  If a calling function passes a parameter via the stack, that parameter must be removed after the function returns.  If local variables are allocated using a SUB operation, we need a paired ADD operation.  By maintaining symmetrical stack operations, the validity of data stored in the stack is maintained and our applications function as expected.