Embedded software designers are required to access specific addresses within the microprocessor all the time.   We use addresses to access peripheral devices, configure the processor, and a variety of other operations.  In the C language, a pointer is used to access data at a specific address.   Here we will examine the basic syntax of how to allocate and use pointers.

In the example above, how many bytes are required to allocate for each pointer type?  The answer is 4 for all of the pointers.  All pointers in the Cortex-M architecture are 4-bytes in length because all addresses are 32-bits.

If you try to access the memory of an uninitialized pointer, bad things happen.  You are essentially trying to read an invalid memory location.  The result is that the microprocessor will issue a fault, your program terminates, and the processor is stuck in the fault handler until the processor is restarted.

When dealing with pointers to structs, we will access the fields within the struct using “->” to de-reference the field.

Pointer arithmetic is the process of adding an offset to the pointer to access a different memory location.

If we are adding constants to a structure, adding positive 1 to the pointer will advance the pointer the total number of bytes for all the fields contained in the struct.

Static memory allocation is perhaps the simplest memory allocation scheme but it has its limitations.  The most glaring limitation is that we must know the memory size requirements of data at compile time.  In some situations we may not know exactly how much data our system will require.  One work around is that you can simply allocate more data at compile time than is necessary for a given variable and hope that will suffice.  There are two potential issues with this approach.  Our guess at “more” data may still be too small.  On the other hand we may over compensate and allocate a block of SRAM that is much too large.  As a result we now have a large section of SRAM that is allocated but only a fraction of it is actually used by the application.  The unused portion of that large block is effectively a lost resource.

Dynamic Memory Allocation solves some of the problems encountered by static memory allocation. In many situations, we want to have more flexibility in how memory is allocated .  One example is to allocate memory on demand.  As the application runs and requires additional memory, we want to be able to grab portions of SRAM that have not been previously been allocated.

Lets examine where the unused section of SRAM resides in our memory map.  SRAM is generically broken down into three sections.: the global memory pool, the stack, and the heap. 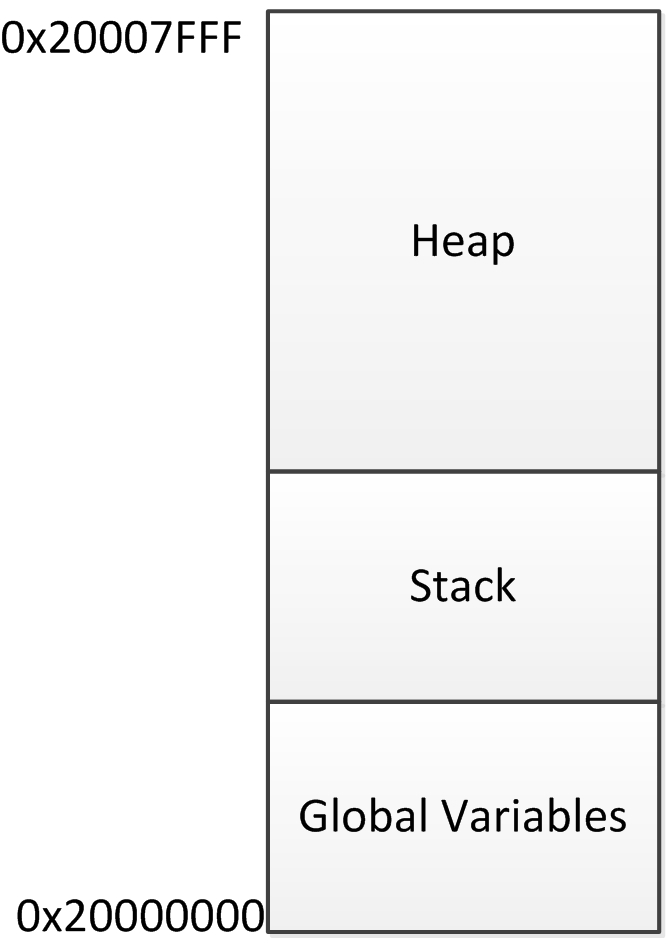 The global memory pool consists  of all global variables declared in the application.  These global variables are statically allocated by the compiler.  The stack is allocated at compile time as well.  A board initialization routine (often found in the “startup file”) will set the size of the stack and adjust the stack pointer accordingly.  The remainder of the SRAM becomes the heap.  The heap is the area of SRAM that has not been allocated at compile time and is available to the application to dynamically allocate while the application is running.

malloc is a library that manages the free space in  heap.  The heap is not simply unused SRAM.  The heap is a collection of data structures that keeps track of unused sections of SRAM.  In very simple terms, the heap is a linked list of free memory blocks.  When you call malloc, it searches a list of free blocks until it finds a free block of memory that will satisfy your request.  malloc removes this block from the free list and returns it to the application.  When the application is done with the block of memory it MUST return it to the heap using the free command.  Failing to do so results in that block of memory being lost to the application since it will never re-enter the free list and cannot be allocated again.  This is called a memory leak.

Dynamic memory allocation has its drawbacks as well.  A portion of SRAM is used as overhead in managing the data structures that keep track of the free list ( next pointers, size information, etc).  The overhead decreases the available SRAM for data.  Allocating memory from the heap can also be a lengthy operation.  Traversing the free list for the most optimal block size is a very computationally intensive task and can consume many CPU cycles.   Dynamic memory allocation also results in the fragmentation of the available SRAM.  As a system runs for extended periods of time, large unused memory blocks become scarce and the heap may not be able to satisfy a request for a large block of data.

Managing the heap is a reasonably complex topic that we will not cover here.  There is first fit, best fit, and next fit algorithms that can be used to determine which free block to return to the application.  There are also algorithms that dictate when to break a larger free block into smaller blocks and how to combine adjacent blocks of memory in the free list.   For our purposes, we are simply going to use malloc and recognize the the Keil uVision tools have already implemented heap management for us.

This example is functionally the same as above, but illustrates a different way to access data using pointers.