The ILI9341 is a QVGA (Quarter VGA) driver integrated circuit that is used to control 240×320 VGA LCD screens.   The ILI9341 is commonly found in low cost LCD screens that can be purchased from various vendors on the web.  The following information is written for the ER-TFTM028-4 from buydisplay.com.  While the information targets the ER-TFTM028-4, it is applicable to most ILI9341 based LCDs.

A good question to ask yourself is “Why do we use the ILI9341 in the first place?”  To answer that, let’s consider how many pixels are in a QVGA screen.  A QVGA screen is an array of 240 x 320 pixels.  That’s 76800 pixels.  Each pixel can be set to one of  sixty four thousand different colors.  That’s a lot of information for a single microcontroller to handle.  In fact, it would be too much information for most microcontrollers to handle and still perform other tasks that are critical to the overall operation of the system.  The ILI9341 acts as a dedicated video processor that offloads some of the video related tasks from the main microprocessor.

Before we look at how to communicate between the ILI9341 and a microprocessor, let’s examine how the pixels in the LCD screen are organized.  In portrait mode, the LCD is 240 pixels wide and 320 pixels high.  Each pixel is addressable by supplying  X and Y coordinates (x,y).

The image below demonstrates where each pixel is located on the ECE353 development board. 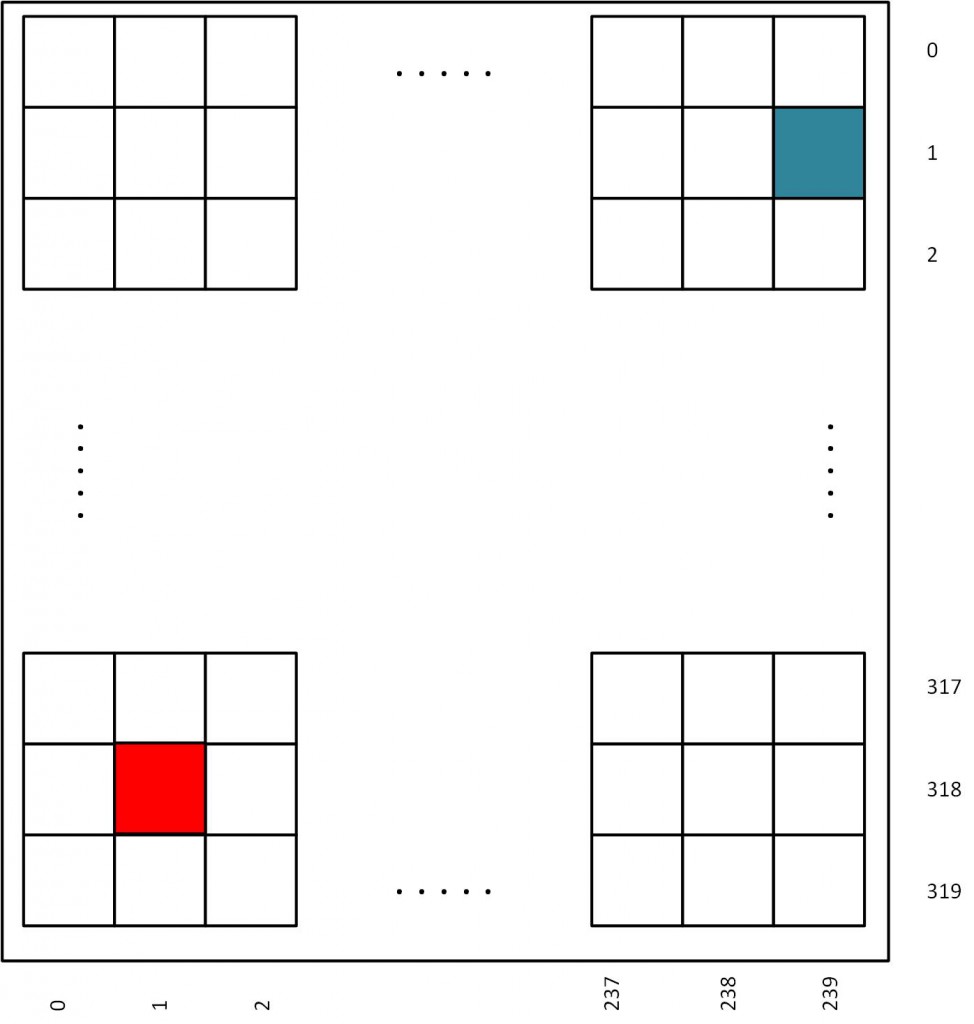 Note:  The orientation of which pixel is (0,0) is configurable in software, but the configuration above is the one that we will use in class.

The parallel interface is comprised of an 8-bit data bus and 4 control signals.

The data interface is an 8-bit parallel interface that is used to supply the values that will be written to a specific command in the ILI9341 command set.

The chip select signal is active low.  The ILI9341 will only read/write data from/to the DATA[7:0] when /CS is low.

The write pin is an active low signal.  When /WR is set to logic 0, the value on DATA[7:0] is written to the currently selected command.

The read pin is an active low signal.  When /RD is set to logic 0, the ILI9341 will place the contents of the currently selected command on DATA[7:0].  We will not read data from the ILI9341, so we will set this signal to a 1.

The data/command pin allows the microcontroller to specify if the data on DATA[7:0] is a command used to change the behavior of the LCD or data that will be written to the currently active command.

The ILI9341 has a set of commands that are exposed to the microprocessor using one of these external interfaces.  Below is a partial snippet of those commands ( You can find the a complete list of available commands on page 83 of the ILI9341 data sheet.)

The behavior of LCD, along with the data being displayed, can be altered by writing data to the currently active command.   Each command holds a variable amount of data that allows the MCU to change the behavior of the LCD display.  Section 8.2 of the ILI9341 data sheet provides the details of what each register does, and which bits within a command set specific behaviors of the LCD.

The supported commands act like a set of registers that are external to the microprocessor.  We can access these “commands” using the GPIO pins on the Tiva Launchpad by setting the values of the GPIO pins connected to the data bus and the 4 command signals to match the requirements set by the ILI9341 datasheet. 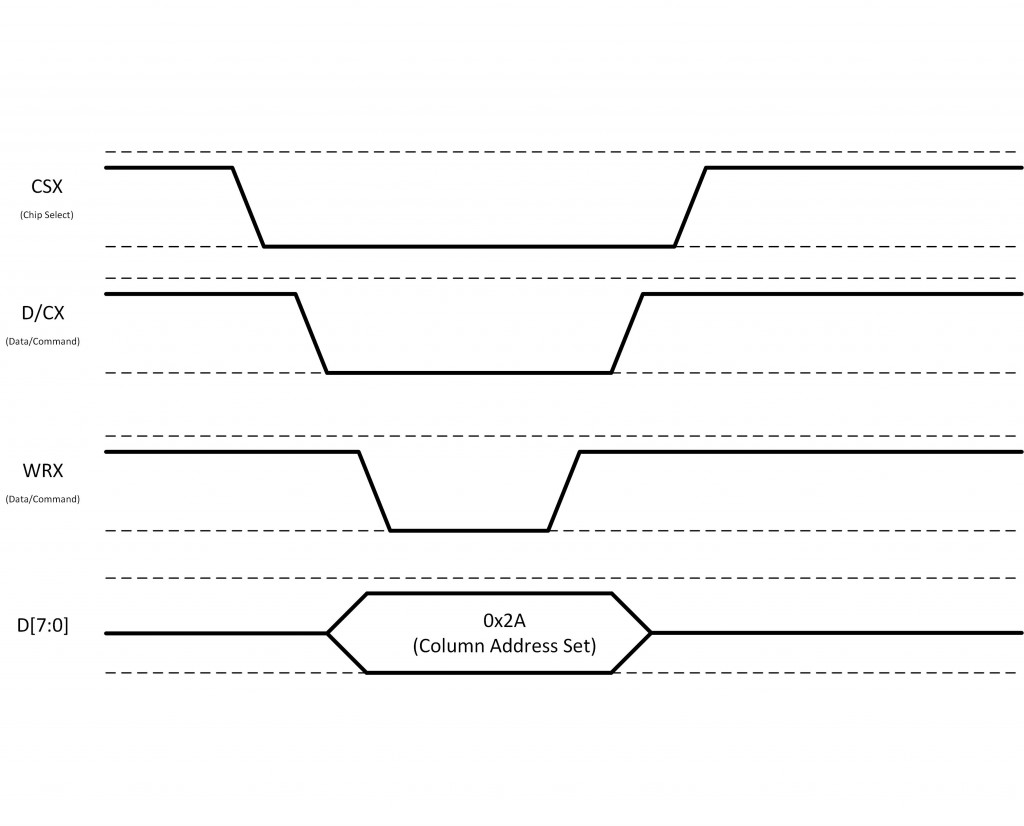 The following steps are required to change the currently active command.

Using these sequence of steps, the microcontroller can set the currently active command to any of the supported ILI9341 commands.

The following steps are required to write data to the currently active command.

The following image shows you how  two bytes of data is written to the current command. 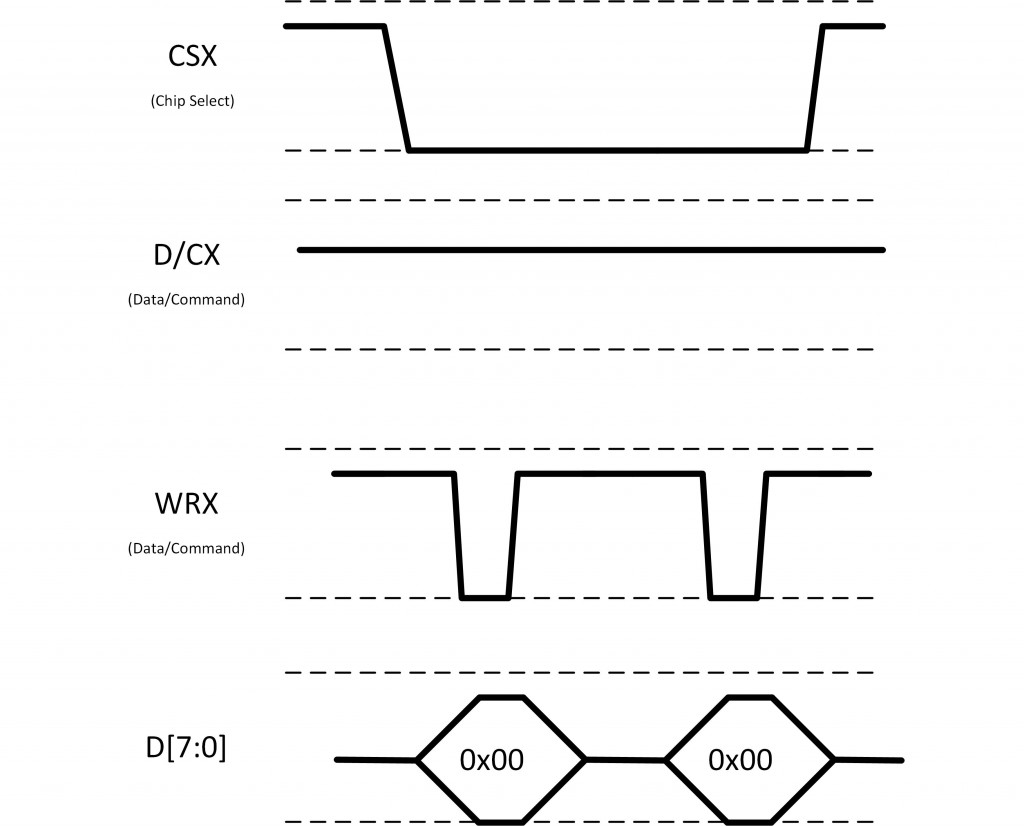 You’ll notice that when writing multiple bytes of data to the current command, the ILI9341 will automatically increment its internal address pointer after each byte is written.

Before you send pixel data to the ILI9341, you will need define an active area for the LCD.  Setting the active area tells the ILI9341 which pixels you are going to modify. 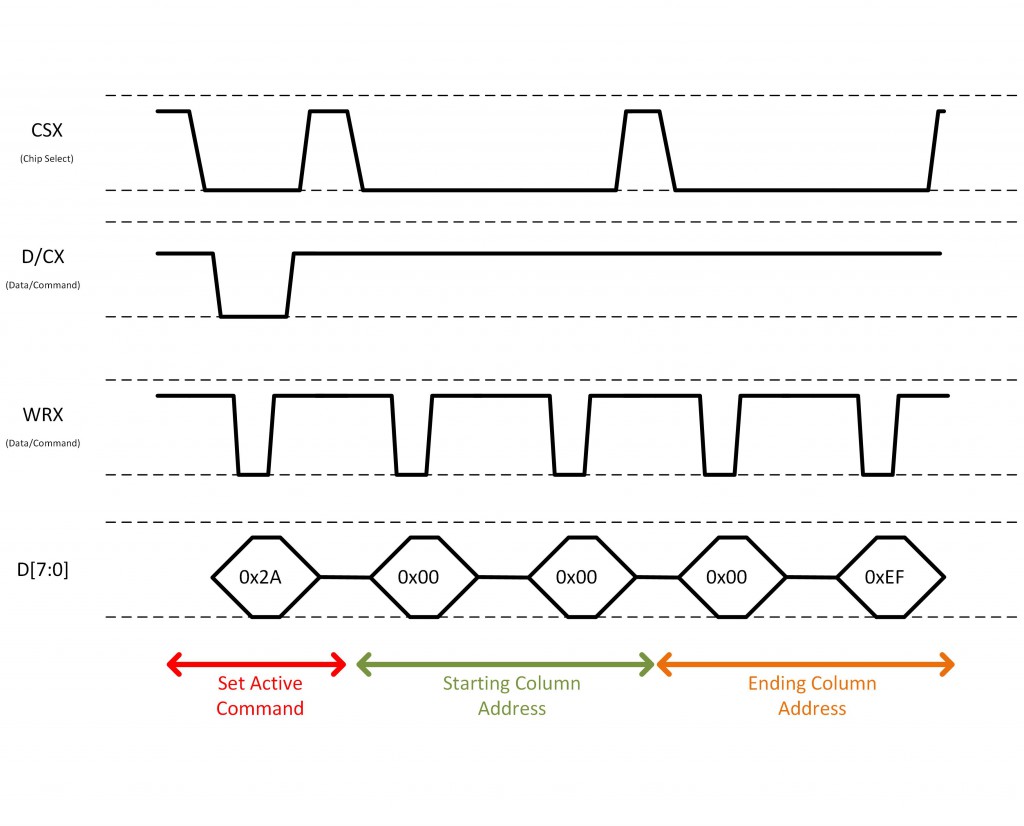 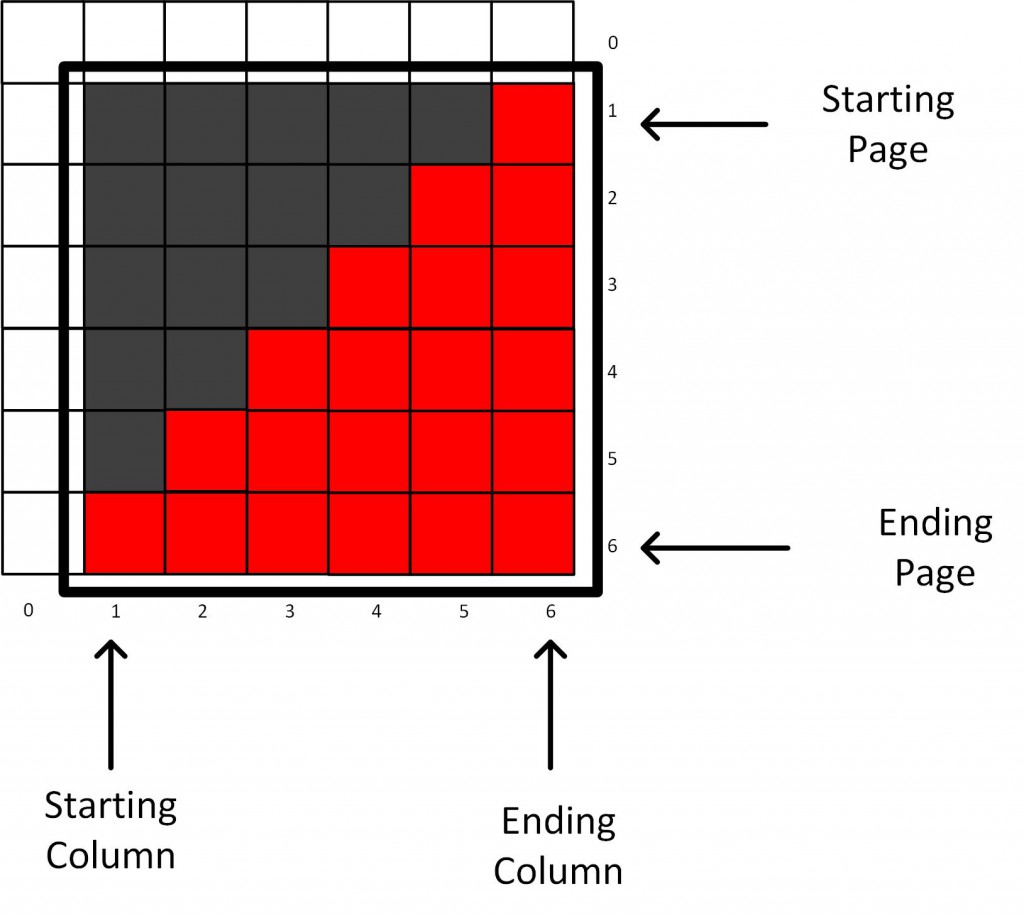 Based on the size of this image, you would want to set the active area of the LCD to be Column(1,6) and Page (1,6).   The code below demonstrates what this might look like.

If we numbered the pixels in the previous image, this would be the order in which the pixels were written to the LCD. 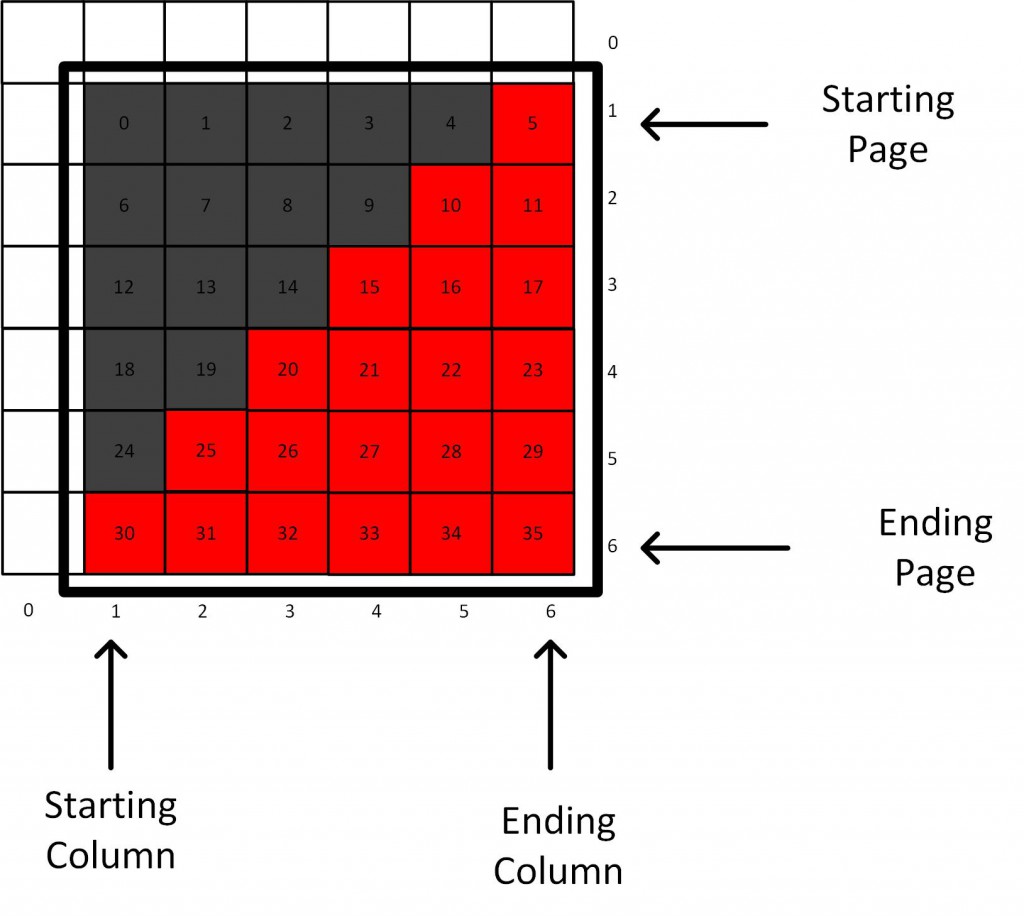